Google announced the O3D API for creating 3D Graphics in the browser. Another smart step to broaden the usage of the Internet which will hopefully end up with a full fledged broswer powered 3D games that are supported by ads someway or another.

Its interesting that all the big companies are using strategies that don’t affect their bottom line directly but strengthen the community around their offerings. Sun, Intel, Google, IBM, and Oracle are all encouraging people to dive in deeper to the technologies they offer for free so they can market thier non-free solutions. In the case of Sun, the strategy that Jonathan Schwarz has resulted eventually in their acquisition by Oracle. Google is making all the right steps, Google Android, Google Code, Maps, Mail, Calendar, Documents, Finance, …etc. All of these apps attract users who are very likely to click on related ads. Once you have proven market leadership, growth becomes the problem. Just hitting the same numbers year over year is not enough to do better in the market. 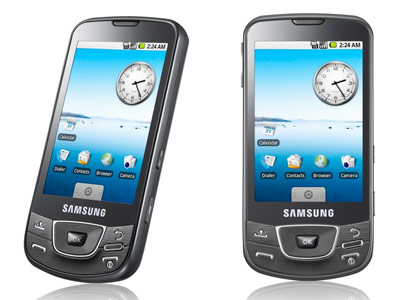 Samsung announced a new Google Android powered phone. All Android phones can not have multi-touch gesture controls like pinch-zooming web pages,maps, and photos. According to the press release, here are the detailed specs of the new Samsung I7500 phone:

The new phone will be available in Europe in June 2009. It seems that T-Mobile will be the carrier in the US. Recently T-Mobile claimed that a million people bought the G1 Google phone. This is in line with Google’s vision to get as many people using the Mobile web using their apps and clicking on their ads. Unfortunately, even this new Samsung is still not good enough for me to get it. I’m using the BlackBerry Curve with T-Mobile and I’m happy with it but its no iPhone. I do have an iPod Touch and loving it. I think by the end of the year, Android should be able to catch up with the iPhone and then it would be a worthy upgrade for me. If by the end of the year, Android is not as good as the iPhone or even better, I will probably switch to AT&T or the Palm Pre. Palm announced a new touch screen phone called the Pre that will be carried by Sprint. The Pre has a sliding full keyboard and seamless integration features with all online apps. It has the ability to run apps in the background features just like the desktop which is not there in the iPhone.

I attached the CES2009 video of Palm Pre:

Here is the layout of Mobile Smart Phones with the carriers in the market:

Microsoft has not done anything to combat the iPhone. When Steve Jobs announced the iPhone a while back, Steve Ballmer laughed at it (video below). Who is laughing now?

JAPAN KEEN TO EXPORT BEEF TO THE GULF

In Shingetsu Newsletter No. 1215, we reported that Saga Prefecture was denied halal meat certification from the UAE due to insufficient space between the areas for slaughtering pigs and cows. Pigs are considered haram, forbidden to Muslims. (These designations can be considered parallel to the concept of kosher meat in Judaism.)

On February 27th, the first commercial exports of Japanese beef were delivered to Dubai. Japanese farmers have been suffering from a slump in prices and low demand in the Japanese market, which makes the Arab consumer market seem like a beacon of hope for them. JES Corporation, a Tokyo-based trading house that is keen to increase trade, sent the first beef to Dubai. The main barrier has been ensuring that the cows are slaughtered in accordance to Islamic law. Aquil Siddiqui, chairman of Japan Islamic Trust, welcomed the idea of importing meat from Japan: “As long as it’s halal, I’m keen to eat Japanese beef.” He then added, “I’m sure that Japanese beef will be well received by Muslims.”

Japan is really keen to ensure that all proper procedures are in place to ensure success of this new venture. In fact, Saga prefectural officials were so overzealous that they did not go through the inspection procedures outlined by the Ministry of Agriculture, Forestry, and Fisheries when they carried fifteen kilograms of beef for an export promotion event in Dubai. The Saga officials apparently thought that no inspection was required, as the beef in question was not for export per se. However, Agriculture Minister Shigeru Ishiba ordered Saga Prefecture to file a report and urged them to take stern action against any beef exported without the proper inspections. It was noted that failure to comply with the inspection laws can result in up to three years in prison or a fine up to US$10,000. Saga Governor Yasushi Furukawa personally flew to Tokyo to apologize for the incident.

French Energy Giant GDF Suez is the sole developer of the Shuweihat II Project, which is comprised of a natural gas-fired power station and a water desalination plant. The Abu Dhabi Water and Electricity Authority owns 60% of the project and GDF Suez owns the remaining 40%. The Japan Bank for International Cooperation (JBIC) will participate by giving US$2 billion in financing for the project. As part of the package, the JBIC is requiring a Japanese partner to be involved in the project. As a result, the Marubeni Corporation is in talks to take at least 20% of GDF Suez’s stake.

In a related story, the Abu Dhabi National Energy Company announced that it is finalizing talks to take over half of Marubeni’s energy portfolio in the Caribbean region. The Marubeni Caribbean portfolio consists of equity stakes in power generation and transmission facilities in Jamaica, the Bahamas, Trinidad and Tobago, and Curacao. These deals are another indicator of the deepening of Japanese-UAE energy relations, as noted in Shingetsu Newsletter Nos. 1259 and No. 1271.

However, Cosmo Oil (the fourth biggest refiner in Japan), which owns Abu Dhabi Oil, has suffered its worst loss ever in the year ending March 2009. The company suffered from a net loss of US$920 million, the largest in its 22-year history. Oil prices have been declining, eroding the value of crude oil inventories and profits from exploration. Nippon Oil Corporation, the country’s largest refiner, and Nippon Mining Holdings are also expecting losses. The Abu Dhabi government’s investment arm, International Petroleum Investment Company (IPIC), acquired 20% of Cosmo Oil in September 2007, as reported in Shingetsu Newsletter No. 744.

Yasuo Fukuda, former prime minister and Chairman of the Japanese-UAE Parliamentary Friendship Association, met in Tokyo with Chairman of the Executive Affairs Authority Khaldun Khalifa Mubarak on March 6th. Mubarak thanked Fukuda for his role in sealing the air transport agreement, which allows the UAE national carriers to commence their flights to Tokyo’s Narita Airport. During his visit to Japan, Mubarak also met METI Minister Toshihiro Nikai and other officials.

Tatsuo Watanabe was named as the new Japanese ambassador to the UAE on February 13th. Watanabe joined the Finance Ministry in 1972 and became director of the Development Finance Division. He later became vice chairman of the Japan Securities Dealers Association, and in July 2008 was named as special adviser to the association. Appointing a financial expert as ambassador indicates Tokyo’s interest in stronger economic and financial relations with the UAE.

Dubai Chamber of Commerce delegates attended the Investment Promotion Forum organized by the Japan Cooperation Center for Middle East (JCCME) in Tokyo and Osaka on March 23rd. In total, eighteen West Asian and North African countries attended the forum. Hassan al-Hashimi, Director of External Relations at the Dubai Chamber of Commerce met with counterparts from Tokyo and Osaka to discuss bilateral cooperation and information exchanges.

Connect with me on LinkedIN